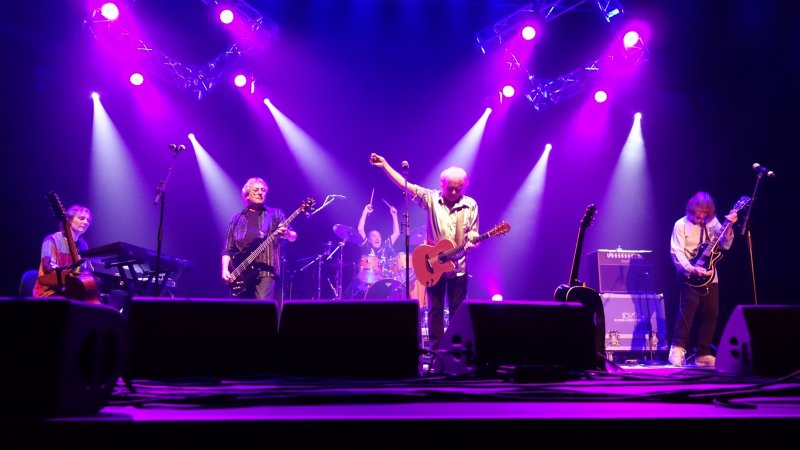 Strawbs album, Hero & Heroine, has been listed by Rolling Stone magazine as “one of the 50 greatest prog rock albums of all time”. It is the band’s biggest seller worldwide and was certified gold in North America.

In the USA Strawbs had seven consecutive albums in the Billboard Top 200.

Dave Cousins, founder member, has been described by All Music Guide as: “the most talented Dylan influenced songwriter to come out of England”.  He recently released his long awaited, and critically acclaimed, autobiography Exorcising Ghosts: Strawbs and Other Lives. It was listed by influential critic Richie Unterberger in his “Top 10 of 2014 rock books”.

Strawbs are often mentioned in the same breath as progressive rock bands like Yes, King Crimson, and The Moody Blues.  It is well documented that Rick Wakeman left Strawbs for Yes.  Rick was followed by Blue Weaver – who left Strawbs to join the Bee Gees, John Hawken – from the original Renaissance, Don Airey – now with Deep Purple, Adam Wakeman, and Oliver Wakeman, who, like his father, left Strawbs to join Yes!.

Strawbs emerged out of the British Folk Movement of the mid-1960s, starting life as the Strawberry Hill Boys playing bluegrass. They moved into the mainstream in 1967 by making the first Strawbs album, All Our Own Work, with Sandy Denny, a full year before she recorded her first album with Fairport Convention. The album attracted the attention of A&M Records in Hollywood who signed Strawbs as the first British band on the label.

Strawbs albums Hero & Heroine, Bursting At The Seams, Ghosts, and Grave New World define the music.  The current Strawbs line-up comprises Dave Cousins, lead guitarist Dave Lambert, bass player Chas Cronk, and drummer Tony Fernandez, who recorded and toured together in the 1970s.  They are joined by keyboard virtuoso Dave Bainbridge of Iona, a band whose mystical blend of rock, folk, Celtic and ambient music has endeared them to audiences across Europe and North America for the last 25 years.