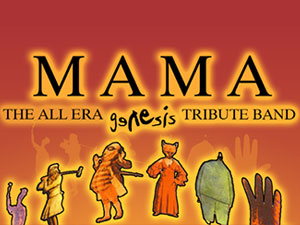 The Band are playing two completely different sets on both nights. Saturday is Genesis, Phil Collins, Peter Gabriel, Mike and the Mechanics HITS

MAMA plays the music of British supergroup Genesis and some pieces by former members. The band is based in the UK and currently plays 20-25 shows a year at venues across the country.