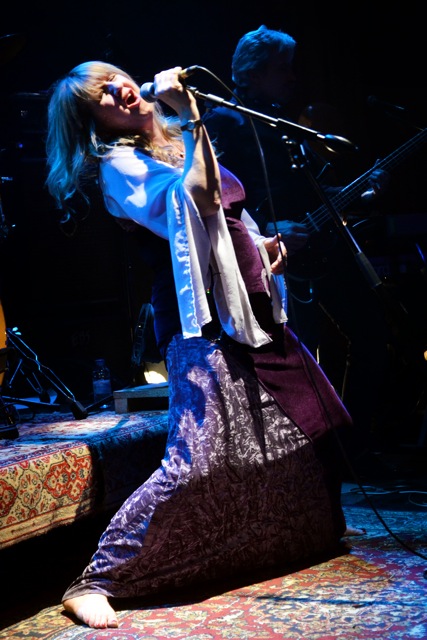 “Deborah Bonham and her band are from and for the heart, soul and feet. No one does what they do. We need them” BBC

“She’s quite possibly the most vocally impressive, entertaining and awe-inspiring performer I’ve seen. The band’s visual presence is phenomenal, all of whom are visibly taking enjoyment from their time on stage.” MetalTalk

With enhanced versions of all of her albums being released later in 2016 through Cadiz Music, ‘The Old Hyde’ feat. Jason Bonham & Mick Fleetwood, ‘Duchess’ feat. Paul Rodgers & Jerry Shirley, ‘Spirit’, feat. Robert Plant, Deborah will be performing many of these songs live plus several originally recorded in 1985 for her debut album ‘For You And The Moon’.  A new album ‘Looking Back At The Moon’, a collection of the 1985-1991 sessions including the best of ‘For You And The Moon’ and some unreleased tracks is now available.

On stage over the last few years she has sung with Paul Rodgers – Deborah’s mesmerizing performance at The Royal Albert Hall as his guest received a standing ovation at the sell-out concert.  When Blues Matters! caught her duet with Dan McCafferty of Nazareth, it was ‘a vocal marriage made in Heaven.’

More recently, Robert Plant stepped on stage unannounced to a delirious crowd at Deborah Bonham’s show to perform Led Zeppelin’s ‘When The Levee Breaks’ with her band and then Johnny Kidd & The Pirates’ classic, ‘Shakin’ All Over’ with Deborah, delighting the crowd with their obvious shared, magical chemistry.

After a rapturous opening set for FOREIGNER at their sold out London Palladium show, Deborah was invited back on stage for the encore to duet on ‘I Want To Know What Love Is’.