Blue Swamp, live at The Green 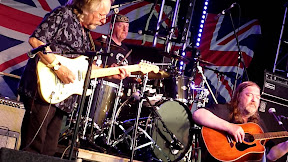 Formed by songwriting duo Johnny ‘Guitar’ Williamson former guitarist with “The Animals and Friends” and Mike Bowden, Vocalist with Dr Truth, Their unique sound has been enhanced with the addition of a red hot rhythm section, Big Vern (Drums) and Jim Moseley (Bass).

Original songs encompass elements from a variety of genres, while remaining rooted in the blues. Four part harmonies and hilarious between song ramblings all add to the experience that is BLUE SWAMP

Johnny “Guitar” Williamson has a very impressive and enviable history, having played with many greats, such as Steve Cropper (Booker T and the MG’s), Spencer Davis, Chris Farlow and Mick Green ( The Pirates, Van Morrison, Bryan Ferry) Jerry Donahue, Zoot Money and Creedence Clearwater Revived . During his distinguished career he has opened for Rory Gallagher, Led Zeppelin, Yes, Deep Purple, Cream, Jethro Tull, John Mayall, Jools Holland, and more recently, Tony Joe White and Nazareth. He was a member of Goliath, Skeleton Crew and, at the time of their chart success, Norwegian band Titanic. He toured with The Animals and Friends for 12 years, but has now left to concentrate on his work with Blue Swamp Band. They have already had a busy schedule with shows in France, Italy, Sweden, and a growing number of clubs and festivals throughout the UK

Mike Bowden is a larger than life character with a great sense of humour, and is highly respected as a singer/songwriter. He fronted the Roach Twins for most of their career, and was also a founding member of Dr Truth.
Whilst mainly playing as an electric 4 piece,  Blue Swamp Band are also available for more intimate semi acoustic shows as a trio or duo.