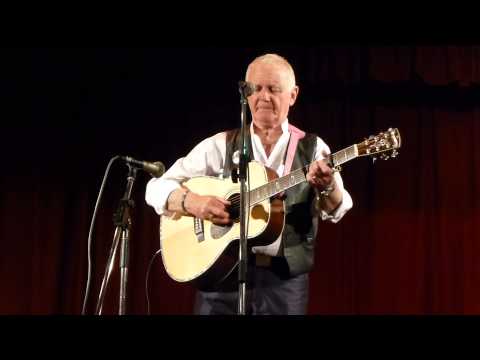 The great Alastair McDonald is in town tonight to offer once again his totally distinctive form of folk entertaining with banjo-accompanied songs and stories of his time on the road over the past decades. An old-school minstrel and multi-recording artiste with innumerable TV and radio appearances, Alastair always hits the nail on the head with his audiences. A good night guaranteed.

Scotland’s musical minstrel, Alastair McDonald is Irvine Folk Club’s first guest of 2014. Alastair plays at the Irvine Club on Wednesday 8th January in Vineburgh Community Centre. He played the closing Club night in 2012 and now balances the equation by opening this new year.

Alastair is a man of ever-extending musical horizons and, depending on the venue is described as a folk-singing banjo player who also plays jazz or the jazz banjo player who also does folk music! In 1970 he became a full-time professional musician and since then has taken his music to the USA, Denmark, Thailand, East Africa, Israel and numerous places in between – with Scotland always being where he does most of his work.

Equally at home in folk clubs, jazz venues, concert halls, theatres or churches – Alastair’s aim is to share some of the very best of his wide repertoire. Scottish historical ballads, Gospel, humorous music hall ditties, Gaelic laments are all covered by Alastair. Thought-provoking, wholesome, uncompromising, uplifting are the main criteria for Alastair’s choice of material.

Glasgow born Alastair emigrated with his family at the age of eight to Australia. It was while growing up in the Australian outback that he developed an interest in ‘home made’ entertainment. Returning to Scotland four years later, there was a growing pop scene and skiffle had also arrived. At just 21, Alastair was already regarded as one of the leading jazz banjo players and the reason he can be still heard all over the country with various Jazz combos.