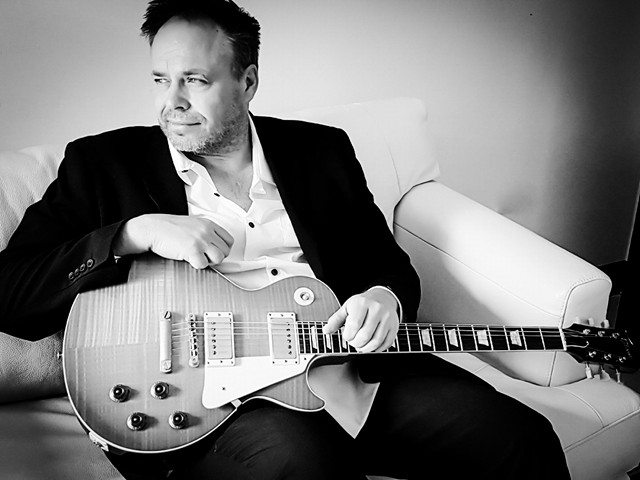 Mick Simpson will play Backstage at the Green Hotel Kinross on Sunday 25th March 2018 at 8.00pm for Mundell Music.

In the early 1980’s Mick worked as a session guitarist and was spotted by Elkie Brooks who asked him to tour in her band. BBC Radio One’s Tommy Vance spoke to Mick backstage after a gig and as a result he played some of Mick’s Instrumental tracks on his ‘Friday Night Rock Show’.

In the mid 1990’s Mick worked with John Parr of ‘St Elmo’s Fire’ fame, featuring on his album ‘Man With A Vision’. A number of tracks from the album have featured on smash hit films, such as ‘Running Man’ with Arnold Schwarzenegger and ‘Three Men And A Baby’ with Tom Selleck. Mick then toured with ex Rolling Stone Bill Wyman’s ‘Rhythm Kings’ and in 2004 his original track ‘A Father’s Son’ won the International Songwriters Award sponsored by the Brits Trust. The track received major TV and radio airplay along with Mick’s song ‘Looking Through My Eyes’ which was released to raise money and awareness of Autism, which is a cause close to his heart.

In June 2005 Mick guested at the 80th birthday of blues legend BB King at his blues bar in New York. He has also played alongside other guitar heroes such as Gary Moore and Snowy White.

In 2010, Mick released his long awaited debut solo album ‘Hard Road’ on the Mad Ears Productions label. The album received support from Paul Jones (BBC Radio 2), and was play listed on the U.S. Blues Radio Network. One of the tracks from the album, ‘Sometimes I Get So Lonely’, was nominated for best original song at the 2011 British Blues Awards (The Kevin Thorpe Memorial Award).

Mick teamed up once again with producer and co-writer, Andy Littlewood, to record his second studio album, ‘Cruel World’. This 11-track blues-rock album was released in March 2012, and features a guest vocal appearance by female artist Malaya, on the track ‘Find Another You’. The Instrumental track, ‘Road To Memphis’, was licensed for the soundtrack of the short film, ‘Road To Hell’, and was also used in the award winning indie documentary, ‘A Message To Myself’’.

In 2014, Mick released his third album, ‘Unfinished Business’, 14 tracks of soaring blues guitar, driving rock anthems and melodic country blues. Album highlights include the southern rock epic, ‘Playing the Losing Hand’, the ‘in your face’ rocker, ‘Trouble Brewing’, and the laid back jazzy blues title track, ‘Unfinished Business’. There’s also a Gary Moore tribute in the shape of a 9-minute guitar fuelled extravaganza titled, ‘Drowning in my Tears’. The album received airplay on BBC Radio 2 with tracks played by both Paul Jones and Alex Lester, and the single ‘Playing the Losing Hand’ reached the number one spot in the Dutch ‘Hit Tracks 100 Music Chart’.

Over the past couple of years Mick has worked as a session guitarist for artists such as Starship, Mockingbird Hill, Malaya Blue, Dave Hunt, and Last Chance Saloon.

Mick is currently performing at various dates up and down the country, the current band line up includes the legendary drummer Sam Kelly (Gary Moore, Robert Plant, Billy Ocean), and renowned bass player Andy Hodge (Whitesnake, We Will Rock You Show). Plans for 2017 also include a series of live dates featuring the members of the original Gary Moore Band.